Six years ago, around Christmas of 2010, Elizabeth Holman, a Palliative Care Psychologist at the Veteran’s Administration, said it was as if a switch flipped in her brain.  She and her spouse Diane Brookshire had been raising CCI puppies for about eight years, but suddenly Elizabeth knew that it was time to put her focus on getting a facility dog. 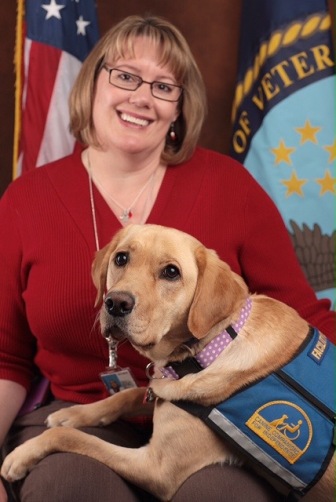 “My boss and the VA leadership was supportive,” Elizabeth explained, “but the Infectious Disease staff was worried – understandably. Their job is to keep the hospital safe and clean.”  Elizabeth kept at it. The facility dog would not be allowed in
rooms of certain patients – anyone with open wounds, for example, or anyone who needed special precautions because they harbored infections that could be airborne. Elizabeth said what won over the staff was that Canine Companions for Independence would be giving, for free, a dog that was valued at over forty thousand dollars. And
they were giving it specifically for the purpose of helping veterans.

Elizabeth got her approval from the VA, and submitted the paperwork to CCI for a facility dog.  In February of 2013, she was matched up with Waffle, a lab/golden mix. CCI trainers later told Elizabeth that she had been invited to that team training specifically because of Waffle. “The really magical thing,” Elizabeth explained, “was that Waffle was born on December 22nd, 2010 – right when I was making that decision to pursue getting a facility dog.”

When Waffle was young, her puppy raisers, Mel and John Dutcher of Salt Lake City, had started visiting at a nursing home, taking Waffle along. As a result, she had been around a variety of patients all of her life.  “Waffle is so calm,” Elizabeth explained, “she’s such an old soul.  There can be total chaos all around, an IV pole dropped in front of her, and she has no response.”

Elizabeth describes her job as being part of a team to support veterans and their families. Palliative care focuses on people who are seriously ill or at the end of life. The VA uses a multi-disciplinary model, staffing their teams with a physician, a nurse practitioner, a social worker, a chaplain, and psychologist. In Elizabeth’s case, she’s a psychologist who comes with a facility dog, so around the hospital their group is known as “Team Waffle.”

A typical day starts with a staff member bringing Waffle her all-time favorite treat, a banana. Elizabeth laughed: “Waffle drools like a waterfall!” Then it is time to see patients. “She loves the time with the veterans. She has an uncanny knack for knowing who needs her.” Waffle makes a bee-line to those people, and likes to get on the beds and snuggle. Elizabeth said that one of her biggest jobs is learning how to listen to Waffle.

There’s lots of anecdotal evidence that facility dogs like Waffle make a difference in the lives of the humans they meet, but scientific studies have been lacking. Elizabeth and Cheryl Krause-Parello, the Director of C-P.A.W.W. (Canines Providing Assitance to Wounded Warriers) joined forces to remedy that. With a PhD in Nursing Research, Cheryl has focused her energies on the relationship between human-animal interaction and stress. Together, they developed a study which measured heart rate, blood pressure, and stress markers which could be measured through a saliva test.

The veterans who agreed to be in the study needed to be in the hospital for a minimum of three days: one day where the baseline data was collected, one day when they met with the psychologist alone, and one day when they met with both the psychologist and facility dog.  The last two days were randomized, so some veterans met first with Elizabeth alone, while others met first with Elizabeth and Waffle. 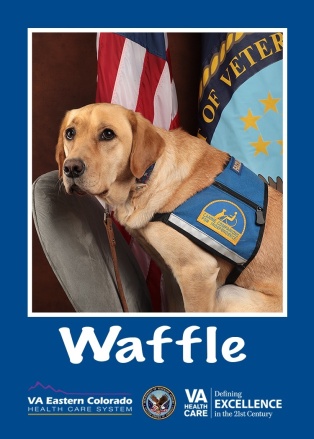 As Elizabeth had hoped, meeting with her alone did indeed lower veteran’s stress levels. But meeting with both Elizabeth and Waffle lowered stress markers even further.

Their study, “Effects of VA Facility Dog on Hospitalized Veterans Seen by a Palliative Care Psychologist: An Innovative Approach to Impacting Stress Indicators” will be published next year in the America Journal of Hospice and Palliative Medicine. One great thing about the study, Elizabeth explained, is that their findings will help therapists and medical staff working to create opportunities for animal assisted interactions in other settings. As for Waffle, Elizabeth said, “I think that she arrived on this planet headed for the Denver Veteran’s Administration.”

This article originally appeared in the December 2016 issue of the Canine Companions for Independence Rocky Mountain Chapter newsletter.